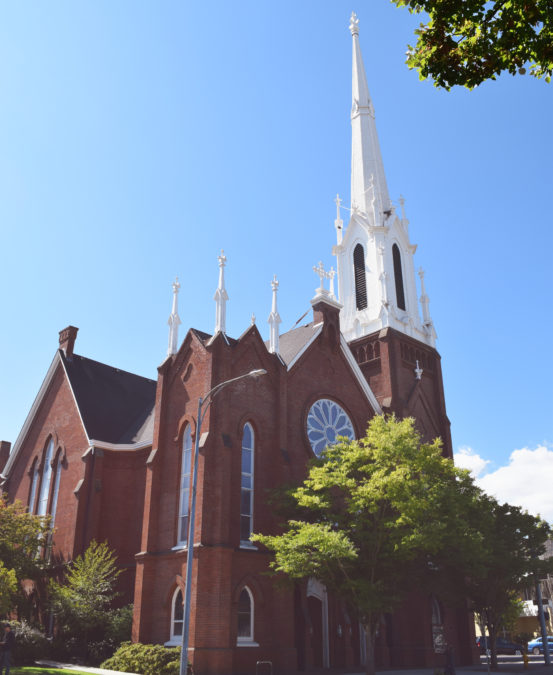 History of Our Church

For a detailed timeline of our history, click here.

Following the precept of John Wesley to take the gospel to people everywhere, the Methodist Foreign Mission Society undertook to send a mission to the Indians of the Pacific Northwest in 1833. The next year the Rev. Jason Lee (Superintendent), the Rev. Daniel Lee, and Cyrus Shephard (a gifted teacher) traveled overland to Fort Vancouver. At the urging of Hudson Bay Factor Dr. John McLaughlin, they selected a headquarters site in the Willamette Valley about 10 miles north of the present city of Salem.

Regular church services began at the mission in 1835, but it was not until 1841, when headquarters were moved to the Salem location, that the Methodist Episcopal Church of Salem was formally organized. Jason Lee was one of 13 charter members, and the Rev. David Leslie became the first pastor. The church met for services in a room of the Oregon Institute. Coincidentally, the Mission families subscribed privately in 1842 to form the Oregon Institute (Willamette University) to provide education for their children. The continuing vitality of these twin institutions, First Church and Willamette, attest to the vision and faith of these pioneer missionaries.

After about 10 years the congregation grew enough to erect a modest building at the southeast corner of Church and State Streets. The mission served twelve stations in the Oregon Territory (then all of the Pacific Northwest) until 1844 when much of the program was discontinued. However, most of the missionaries remained in Oregon. They were influential in the formation of the provisional government (1843-48) which sought U.S. Jurisdiction for the Pacific Northwest prior to the boundary settlement with Britain. Methodism was a stabilizing force through the territorial period and finally for statehood in 1859.

By 1870 both the congregation and the larger Sunday School of First Methodist Church of Salem had outgrown the frame building erected in 1853. Salem was now the capital of Oregon. With the bishop’s support, the congregation undertook the construction of the present sanctuary building. In spite of national depression and other severe difficulties, the church with the tall white spire was completed in 1878.

Now both a Methodist landmark and an enrollee of the National Register of Historic Places, First Church cherishes its pioneer heritage.

Harmonious additions to the building were made in 1935 and 1967.  In 1953 our sanctuary was extensively remodeled, with the addition of the Findley organ, carillon bells, chancel rose window, new altar, pulpit, and pews. Interior renovations occurred in 1981 and 1988.  The spire (the original was replaced in 1984) stands 185 feet above street level and is a landmark for everyone in Salem

Over the years First Church has helped establish several other Methodist churches in Salem. As a downtown church, it has joined with other denominations in community service, worship, and study. Most important, it is the spiritual home of a church family that ministers to its membership and its community in a dynamic tradition.

Historic photos of the MICAH building

Historic photos with the historic building in the background